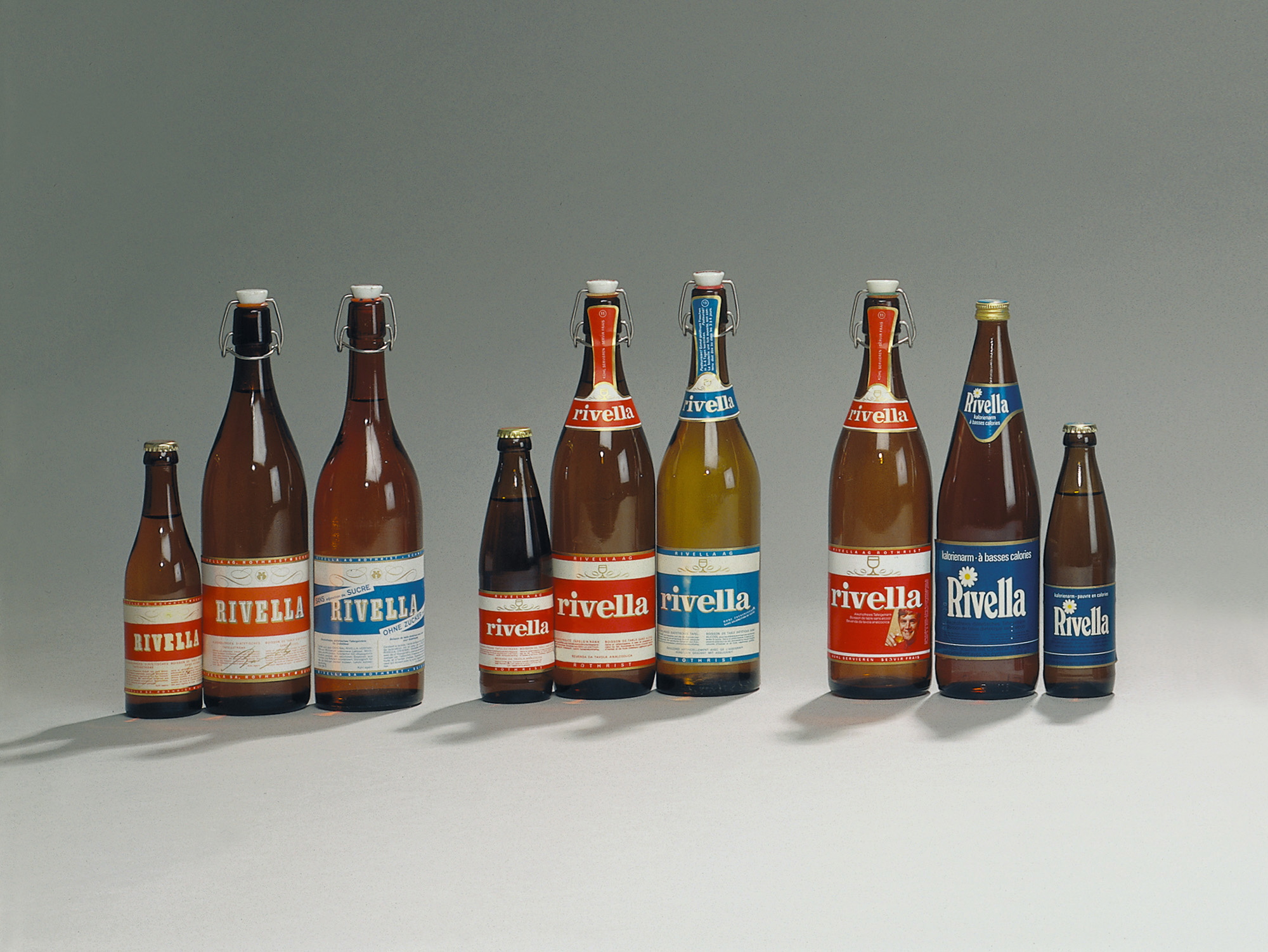 Where does the name of Rivella come from?

Originally published in French at HelvetiaHistoria

An ace storyteller would tell you the genesis of the Rivella by imitating a little bit the success stories imported from the United States. After all, the practice is commonplace. It’s a dream come true: two (almost) ordinary guys tinker with their computers in a simple garage and (almost) miraculously create the world’s most powerful search engine.

But the story of the Rivella doesn’t start in a garage, but in a bathroom. The story of Robert Barth, a law student from Zurich who had the wit to sniff out a promising niche market. But his stroke of genius wouldn’t have gone very far without the invaluable help of several members of his entourage… and without a particularly favourable economic context. A look back at the origins of a lemonade that has been making the Swiss foam for almost seventy years.

In 1951, Jean Barth (our Robert’s brother) returned to Switzerland after a stay in the United States that left him with a bitter taste. He had hoped to market a beer based on whey, a beverage also known as whey. Sure of his concept, he had left with the soul of a conqueror. Alas for him, he would soon be disillusioned, since the Americans did not see fit to follow him in his adventure.

On his return, his brother Robert decided to recycle his idea. After all, the history of whey has everything to attract the consumer. As early as the 18th century, the liquid was already being touted to tourists passing through Switzerland: it was said to be full of virtues that could cure many illnesses. In the middle of the 20th century, whey was available in industrial quantities. Do you know why? Simply because it is produced by processing milk into cheese, which began to be produced in huge quantities in the 1950s.

Robert Barth, 29, experimented with whey in his bathroom to develop his recipe, which is still as secret today as the recipe for Coca-Cola (and any other clever brand, you might say). To refine his mixture, he receives advice from a member of staff at the Institute of Dairy Technology at the ETH Zurich.

Very quickly, our man founded his company, with a somewhat obscure name, which evokes a research laboratory more than a drinks business: “Milkin-Institut Robert R. Barth”. He established it in Stäfa, a Zurich municipality of some 5,000 inhabitants. Careful, anxious not to waste his money, he procures second-hand machines… and hires his first employees.

Birth of a brand

Concocting a tasty drink, creating your own business, finding premises… That’s all well and good, but you still have to be able to sell your goods. And commercial success depends first of all on choosing a name that is easy to remember, pleasant to the ear and pronounceable in all languages.

Robert Barth raced his brains. Well aware that mastering marketing will contribute to his future success, he wanted to find an attractive name.

Legend has it that while browsing through an index of SBB railway stations, he came across the name “Riva San Vitale”. It is said that this is where he got the name of his brand. The problem is that this is a village in Ticino, and Swiss law does not allow the use of place names for consumer products. Robert Barth drinks the cup.

The brainstorming sessions resume. Suddenly, enlightenment! Why not call his drink ‘Rivelazione’ (‘revelation’, in French). Our brave Robert seems to have a thing for the Italian language. But isn’t that name too long and hard to remember? Wait… How about “Rivella” instead? Short, simple, effective. That’s perfect! Robert Barth’s advertising consultant agrees.

On 13 March 1952, the company officially opens for business. For the occasion, Robert Barth invited the press, who were sure to write good papers on the Rivella. The future looked bright.

Very quickly, Rivella beconmes popular. Consumers enjoy the taste of the new drink, as the company floods newspapers with advertising to raise awareness of the brand across Switzerland. And the sales arguments are raining: Rivella would be ideal during cures and sports sessions. It would regulate the body and would be particularly suitable for the sensitive stomachs… have a look at the advertisements:

Of course, such blustering makes people smile today, when you know that a single glass of red Rivella contains no less than 23 grams of sugar… However, at the beginning of its existence, the brand was in tune with the times.

Indeed, Swiss society underwent profound changes during the 1950s. Mass consumption grew at a rapid pace due to the economic growth that characterised this period: the three decades following the Second World War were not called the “Glorious Thirty” for nothing.

Households became richer. They took advantage of these boom years to buy refrigerators, cars, washing machines and other electronic appliances. At the same time, the right to paid holidays in Switzerland was gradually gaining ground: as early as 1947, a law passed by the people of Vaud guaranteed two weeks of paid holidays per year.

The time freed from work allowed people to devote their leisure time to travel, cultural outings and walks. Rivella stepped into the breach and seeks to associate its name with the new favourite occupations of the Swiss, such as sport. The company has been an official partner of the national ski team since 1977. Whey and snow: the main ingredients of patriotic imagery come together. Coincidence? No way. It’s all about ensuring the success of the brand.

However, the first years of activity will not be easy for Robert Barth and his team. A few clouds obscure the horizon: the Swiss Association of mineral water sources is enraged by this competition and tries to organize a boycott of Rivella. But it did not have too serious of consequences, since many partners remained loyal to the Stäfa company.

Finally, the company did not stay in Stäfa for much longer. In 1952, they began to feel cramped in their original premises. The purchase of a more spacious production facility had to be considered. Rivella needed room to produce more, to sell more bottles and to conquer the Swiss market in the long term. After careful consideration, the decision was made in 1945 to move to Rothrist in Aargau.

Over time, the company grew and increased its sales. In the second half of the 1950s, the company even exported its famous drink abroad, first to the Netherlands. Rivella chose the Dutch regions to launch its blue, low-sugar variant. For the record, Rivella bleu was created thanks to the Dutch Diabetes Association.

Rivella has not been successful, however. It has failed to establish itself permanently in many countries, such as the United Kingdom, Australia, Sweden and Japan. In 2008, the brand tried to market a yellow variant, made from soy but never found an audience.

Despite everything, Rivella remains a ubiquitous drink, thanks to an advertising strategy that targets sporting events in particular. And to the unwavering love of the Swiss, who each drink around ten litres a year. Santé!