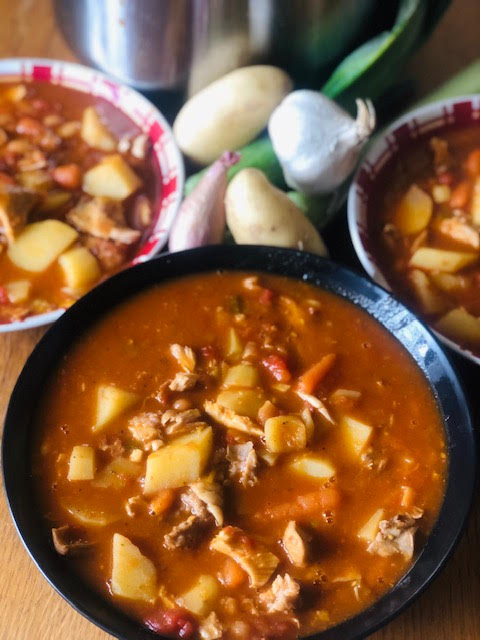 When it comes to eating rabbit in any dish, two people always come to mind: my mother and my father-in-law.

When I was child growing up in Chicago, my mother (a Southern woman originally from the Mississippi Delta) would crave comforts from the region. Whenever she felt this heightened level of longing, she only ever wanted three things: fresh black soil from the Delta, fresh or frozen buffalo fish or rabbit.

The fish and rabbit I could understand but the black soil?  Well, that never made any sense to me — especially when my mother would nosh on it right out of the clean, empty shoebox for which it would arrive from down-home relatives. I’ve been told that people do this because they suffer from a mineral deficiency but that’s a story of another time.

Everything separated my mother from my French father-in-law. They were separated by age, race, distance, culture, and language. And yet, there is one thing for which I am certain they could have found common ground that’s just how delicious rabbit tastes in almost any dish.

My father-in-law was an avid hunter, and like my mother-in-law, a great cook as well. Once while visiting him, he took me out on a hunt. Growing up in an urban environment, that trip taught me two things I never knew about hunters: first, they hunt out of necessity; and second, they don’t waste. Hunters take a real ‘nose-to-tail” approach, ensuring that every part of the catch can be consumed, salted, smoked, or at least preserved by freezing. Rabbit was our catch that day.

So, when I recently entered the supermarket and browsed the meat section, I should not have been surprised to see so many rabbits on display – after all it is La Chasse or hunting season in Switzerland. That’s when I realized a few more things: first, for most of my life, I had only eaten rabbit as a fried dish like chicken; second, I had not eaten rabbit in ten years, since my mother-law had last prepared it for me; and third, I really liked the taste of rabbit.

So, in honour of my mother and my father-in-law, I decided to make rabbit stew for the first time, and it was surprisingly so good. There’s nothing special about it. Just like my Southern farming family and French farming family, you’ll find nothing fancy nor pretentious here. Just simple and satisfying comfort food. It seems like my two families had a lot more in common than I ever realized.

Carolyn Moncel is Souper-in-Chief at SimplySouperlicious.com. Follow her veggie and soup journey on social media @simplysouperlicious.